A version of this story appeared in CNN’s Meanwhile in China newsletter, a three-times-a-week update exploring what you need to know about the country’s rise and how it impacts the world. Sign up here.

Hong Kong (CNN)For decades, Chinese authorities imposed strict limits on families that forced millions of women to abort pregnancies deemed illegal by the state.That harsh practice has become less common since China relaxed its one-child policy in 2015. So when news emerged this week that the government wants to reduce abortions for “non-medical reasons,” the backlash was swift and furious.Chinese social media was flooded with comments from women fed up with what they see as government efforts to control their bodies, describing the apparent U-turn on abortion as a desperate attempt to boost the country’s dwindling birth rates.

“The female body has become a tool,” said one top comment on Weibo, China’s Twitter-like platform. “When (the state) wants you to bear a child, you must do it at all cost. When (the state) doesn’t want it, you’re not allowed to give birth even at the risk of death.”

The abortion policy was included in an expansive government blueprint to further women’s rights over the next decade, covering areas ranging from education to employment, which state-run media boasted would improve gender equality “to a higher level in the new era.”The measure on abortion was part of a larger section about reproductive health that included provisions such as increasing health education and access to contraception. Beyond that brief sentence, however, no other details — such as how the abortion restriction would be implemented or what criteria women would need to meet — were provided.But the fact it was mentioned at all in the sweeping 10-year plan is concerning — and could be part of the government’s campaign to increase the birth rate as it faces a growing demographic crisis, said Leta Hong Fincher, author of “Betraying Big Brother: The Feminist Awakening in China.””This, of course, is not a red alert nationwide ban on abortion, which would create an enormous uproar,” she said. “But, in fact, it’s more obvious than I had anticipated because it’s coming in the form of this document issued by the State Council, a nationwide policy document.”Despite its brevity, the line is “a statement of central government policy, and it sends a signal to all of those local level (Communist Party) cadres that this is a priority of the central government,” she added.Abortion has been widely practiced in China for decades. Under the one-child policy, introduced in 1979, millions of women a year were forced to terminate “illegal” pregnancies. The traditional preference for sons also led to a rise in sex-selective abortions, with families often choosing to abort girls. This has contributed to a significantly skewed gender ratio, with the 2021 census revealing there were almost 35 million more men than women in the country of 1.4 billion.But over the past decade, China changed tack completely as it began to reckon with the consequences of its one-child policy — a rapidly aging population and shrinking workforce that threatened the country’s economic growth.To raise its plummeting fertility rate, China enacted the two-child policy in 2016, then the three-child policy in August this year. The government has also launched an aggressive propaganda campaign urging women to have more children, with some local authorities even offering financial incentives for families.

China wants families to have three children. But many women aren’t convincedSo far, their efforts have been met with a lukewarm response at best. Many women, who now enjoy greater educational and career opportunities than in the past, are reluctant to expand their families — especially with other obstacles like a high cost of living and entrenched gender norms that relegate childcare to mothers.Abortions have also remained high, even after the one-child policy was relaxed and the government criminalized sex-selective terminations. An average of 9.7 million terminations were performed per year between 2014 and 2018, according to Reuters, citing data from China’s National Health Commission.In response, authorities have increasingly voiced concern over abortions, with state media warning they were “very harmful” and could cause “serious psychological disorders” in unmarried women. In 2018, Jiangxi province banned abortions for non-medical reasons after the 14th week, joining several other provinces with similar rules in place.”The entire history of population planning in China … has been incredibly abusive and coercive,” said Hong Fincher. “So I think there is a lot of reason to be very concerned about this complete 180-degree turn in emphasis coming from the central government, saying that now, China needs to reduce the number of non-medical abortions.”Some experts, however, caution it’s too soon to say what the impact will be — especially since it’s not the first time the government has signaled such intentions. The last 10-year plan for women’s development, published in 2011, also aimed to “reduce the rate of abortion” and of unwanted pregnancy in general by improving sexual education and access to contraception.”This is not a new policy,” said Feng Yuan, a feminist scholar and activist. “Currently we don’t see any reason for stricter (implementation).”Besides, she added, several other countries also restrict terminations of pregnancies beyond 14 weeks for health and safety concerns. The reason the policy is prompting debate now is “because the attention and focus on the issue has changed, where people are concerned about limits on their rights to control their bodies,” she said.The government will also probably tread lightly on the issue, said Hong Fincher. Authorities are aware this is a delicate, controversial topic that could prompt public backlash, especially with growing awareness among women of their rights and bodily agency.But still, when viewed in context of the government’s accelerated push for children — as well as its heavy crackdown on China’s feminist movement in recent years — the policy unveiled on Monday doesn’t seem to bode well for women in the country.”There’s this rhetoric that the Communist Party was founded on the basis of gender equality … it’s literally enshrined in the Constitution,” said Hong Fincher.”But the fact is, just looking at the evidence of quite a few years already … the government’s movement has been in opposition to furthering women’s rights, in opposition to gender equality. I think that the direction is clear now.” 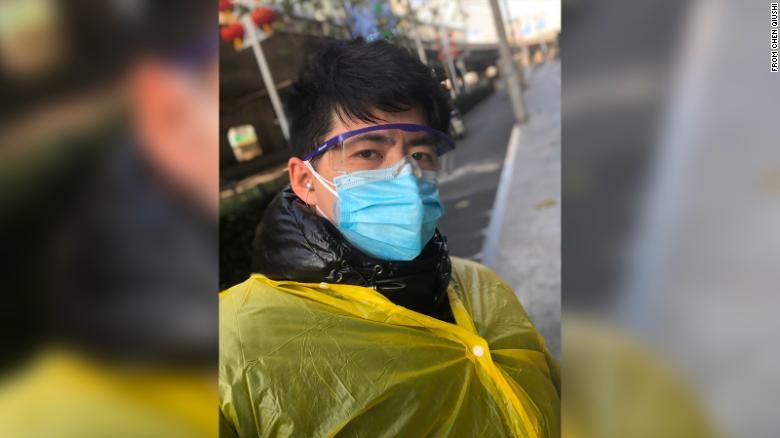 Chen Qiushi, a citizen journalist who was silenced for reporting on the coronavirus outbreak in Wuhan, has resurfaced on social media.A Chinese citizen journalist who disappeared in February 2020 while reporting on the havoc of China’s initial Covid-19 outbreak in Wuhan has finally resurfaced on social media, making a cautious and somewhat subdued return as a boxing fan.Chen Qiushi, a former lawyer, arrived in Wuhan in late January last year — a day after the central Chinese city was placed under the world’s first coronavirus lockdown. He visited overflowing hospitals, funeral parlors and makeshift isolation wards and uploaded videos of what he saw, offering the world a glimpse into the grim reality at the heart of the crisis.But Chen went missing after two weeks of critical reporting, and was later revealed to have been forced into quarantine by authorities, according to his friends and family.On Thursday, Chen suddenly broke his silence on Twitter. In a post to his 340,000 followers, he wrote about his new passion for boxing and announced he was organizing a fight to raise money for charity.”Long time no see! In the past year and 8 months, I’ve been through a lot — some of which I can talk about, and some I can’t. I believe you all understand,” he wrote.”During the darkest moment of my life, it was boxing that saved me. Boxing and Brazilian jiu-jitsu not only gave me a healthy body, but also helped set me free from depression.”His first public appearance in 19 months has come as a big surprise — and relief — to friends and fans. Less than 24 hours before Chen’s latest tweet, a friend who had been authorized to take over his Twitter account was still asking about his whereabouts.CNN has reached out to Chen for comment.Later on Thursday evening, Chen also appeared briefly in the YouTube livestream of his friend Xu Xiaodong, an outspoken mixed martial artist who campaigned for his release.”I haven’t done any videos for a long time. Now I feel nervous facing the camera,” he said, sitting next to Xu.Chen tiptoed around what exactly happened to him, but he did allude to the toll it had taken on his physical and mental health.”When I first regained freedom, my health condition was very bad — I would feel exhausted after walking for one or two kilometers,” he said, adding that he also had depression.Chen said going forward, he wanted to devote himself to the promotion of boxing. “The past will eventually pass. And the good days will eventually arrive. Let’s add oil together,” he said.But it appears even that was not tolerated by Chinese authorities. Hours after Chen made a comeback on Douyin, the Chinese version of TikTok, his account was deleted.Chen was among a handful of journalists, activists and doctors silenced by the Chinese government for trying to tell the truth about the Wuhan outbreak.Last December, Zhang Zhan, an independent Chinese journalist, was sentenced to four years in prison for “picking quarrels and provoking trouble” — an offense commonly used by the Chinese government to target dissidents and human rights activists.Two other citizen journalists, Fang Bin and Li Zehua, still haven’t been heard from since they went missing in Wuhan last year.