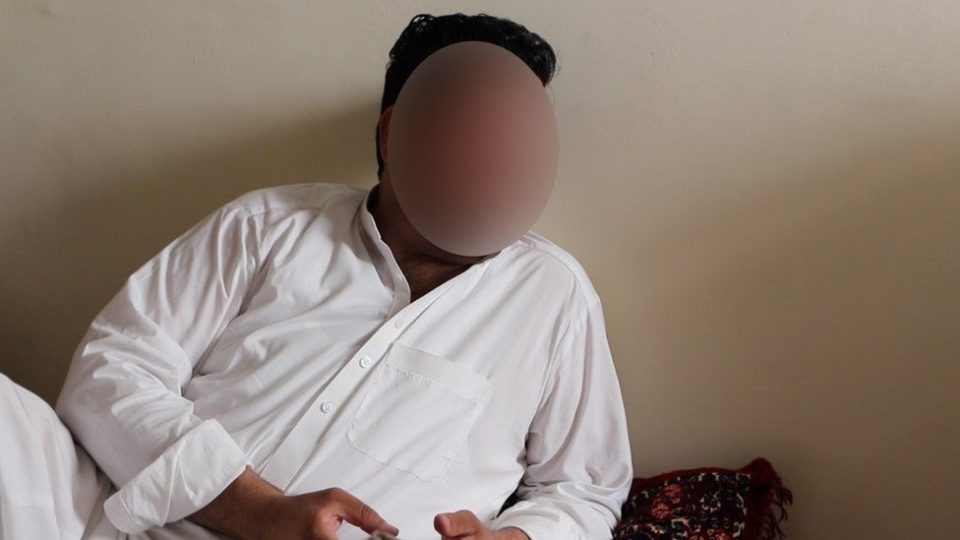 Afghan singers who escaped to Pakistan say they had no choice but to flee when the Taliban took power in Afghanistan.

The BBC spoke with six singers who crossed the border to Pakistan illegally and are now living in hiding. One said he feared he would be executed if he stayed in Afghanistan.

The Taliban have banned music and are accused of executing a folk singer in northern Baghlan province in August.

The militant group has not responded to the allegation.

Singer Fawad Andarabi’s son Jawad told the Associated Press that his father was shot in the head at the family’s farm in the Andarab valley.https://platform.twitter.com/embed/Tweet.html?creatorScreenName=BBCWorld&dnt=false&embedId=twitter-widget-0&features=eyJ0ZndfZXhwZXJpbWVudHNfY29va2llX2V4cGlyYXRpb24iOnsiYnVja2V0IjoxMjA5NjAwLCJ2ZXJzaW9uIjpudWxsfSwidGZ3X2hvcml6b25fdHdlZXRfZW1iZWRfOTU1NSI6eyJidWNrZXQiOiJodGUiLCJ2ZXJzaW9uIjpudWxsfSwidGZ3X3NwYWNlX2NhcmQiOnsiYnVja2V0Ijoib2ZmIiwidmVyc2lvbiI6bnVsbH19&frame=false&hideCard=false&hideThread=false&id=1431647857883459594&lang=en-gb&origin=https%3A%2F%2Fwww.bbc.com%2Fnews%2Fworld-asia-58583217&sessionId=21da94b278e9597faebb86d5c8d63eb9ba302d76&siteScreenName=BBCWorld&theme=light&widgetsVersion=1890d59c%3A1627936082797&width=550pxThe BBC is not responsible for the content of external sites.View original tweet on Twitter

Khan (not his real name) was based in Kabul for the past 20 years and sang and played music at weddings across the country. Folk singers are popular at Pashtun weddings.https://buy.tinypass.com/checkout/template/cacheableShow?aid=tYOkq7qlAI&templateId=OTBYI8Q89QWC&templateVariantId=OTV0YFYSXVQWV&offerId=fakeOfferId&experienceId=EXAWX60BX4NU&iframeId=offer_0e763acc7b457c03340a-0&displayMode=inline&widget=template

Music had been banned under the previous Taliban regime but business had been good since they were overthrown in 2001, he said.

As the Taliban advanced across the country this year Khan and others were unconcerned; they believed that the militant group had changed and would allow them to continue their music-making.

But after the Taliban took control of the capital last month, armed men – who Khan believes were Taliban fighters – came looking for him and smashed up his instruments.

“At midnight my office guard called me and said some people came with guns and broke all the instruments, they are still here and asking about you,” he said.

He and his family left Kabul in the early hours of the following morning. He now says he was wrong about the Taliban.

The singers and musicians who have fled Afghanistan via the Torkham and Chaman border posts are now hiding in the suburbs of Islamabad and Peshawar and trying to find a way to seek asylum outside Pakistan.

Hassan (not his real name), another singer who is now living with a friend in Rawalpindi, told the BBC that he believed the Taliban would execute him if they found him because he had sung a song for the Afghan national army before the fall of Kabul.

Fearful for his life after the militants took over, he left his family behind and travelled to Pakistan.

“Even when the Taliban were not in power, they used to make threats to me and I was a staunch opponent of them too,” he said.

Even before the fall of Kabul, when the Taliban took control of a city they would ban music on local FM radio stations and turn state-run broadcasting into the Voice of Sharia, referring to Islam’s legal system, with programming consisting of religious chanting.

The Taliban disapprove of music due to their strict interpretation of Islam, a view not shared by most Muslims.

“We used to broadcast music on our radio and TV but we are not broadcasting it any more after the Taliban took over,” Massood Sanjer told the BBC. Mr Sanjer is director of the Moby group of channels, which include the Tolo News channel.

The group’s 24-hour music station has been closed, Mr Sanjer says. “The only music that is broadcasting at the moment on our entertainment channel is ‘Naat’, the Taliban’s anthem,” he said.

Akhtar (not his real name), another singer who fled the country with five families of his friends and relatives, told the BBC they had travelled a “grim journey with risk to our lives”. It took them nearly five days to arrive at a friend’s place in Peshawar.

During the journey he was afraid for his seven-year-old daughter, who has a heart condition. “All the way I was not worried for my own life, I was worried about her life,” he said.

He and the growing group of singers and musicians sheltering in Pakistan are hoping to find a new place to live where they can ply their trade and live without fear, he said.https://emp.bbc.com/emp/SMPj/2.43.9/iframe.htmlmedia captionFemale presenters return on Afghanistan’s Tolo News, with one interviewing the Taliban

Tangerang: At least 41 dead after fire breaks out in Indonesian jail