Food allergies can be extremely risky, even fatal – and they’re on the rise around the world. Why are they increasingly common, and what can we do to prevent them?

A food allergy can be a terrifying thing. When someone eats even a small amount of a food to which they are allergic, a minor reaction can involve itching, swelling, and stomach ache. But one in four people unlucky enough to have a food allergy, even a mild one, will at some point experience a severe reaction: anaphylaxis, a state of shock defined as a reaction involving two of the body’s organs, is characterised by symptoms like wheezing, dizziness and vomiting. The pulse can slow, blood pressure can drop, and the airways can close. In an alarming number of people in the last few years, it has been fatal.

More of the population has food allergies than ever before – and around the world, they are sending more and more people to hospital. One large-scale review of hospital admissions data found anaphylaxis cases on the rise in the US, Australia and Europe, among other regions. In the US, hospital visits for food allergy increased threefold from 1993 to 2006. Between 2013 and 2019, England saw a 72% rise in the number of hospital admissions for children caused by anaphylaxis, from 1,015 admissions to 1,746.

“That food allergies have risen is unquestionably the case, to an absolutely crazy extent,” says Graham Rook, emeritus professor of medical microbiology at University College London.

One theory behind the rise has been that we’re simply more aware of food allergies. But Kari Nadeau, a Stanford University allergy specialist who calls the rise an “epidemic” in her new book The End of Food Allergy, says this isn’t the case. “It’s not just because we’re getting better at diagnostics, because we’re actually not,” she says. “We are becoming more aware of it, but that’s not increasing the diagnosis.”

It’s difficult, however, to pinpoint just how much food allergies have risen. Three to four times as many people think they have a food allergy as actually do, making self-reported data difficult to trust. Much of this is because food intolerance and food allergy can be confused. Meanwhile, many countries have no data on food allergy prevalence. Furthermore, the “gold-standard” test for a food allergy – which involves feeding a small amount of the food to the person in question in a clinical setting – is time-consuming, costly, and comes with risks.

Nevertheless, looking at data from multiple peer-reviewed sources, Nadeau says that the rate of food allergies worldwide has increased from around 3% of the population in 1960 to around 7% in 2018.

And it isn’t just the rate that has increased. The range of foods to which people are allergic has also widened. Peter Ben Embarek works for International Food Safety Authorities Network, a World Health Organisation body that responds to food safety emergencies. “Initially, decades ago, it was only the classical ones: seafood, milk and nuts,” he says. “That has expanded dramatically to a whole range of products now.”

Experts agree that food allergies are on the rise. The question is, what explains it?

One explanation goes by the name the “hygiene hypothesis”, although the phrase itself is now given a wide berth by allergy experts. “The ‘hygiene hypothesis’ is an appalling name because it gives everyone the wrong idea about what’s going on,” says Rook. It would imply that the cleaner we are, the more likely we are to contract allergies. But that’s not quite right.

The theory was postulated by epidemiologist David Strachan, who observed in 1989 that children with older siblings are less likely to get hay fever and eczema. “Over the past century,” he wrote, “declining family size, improvements in household amenities, and higher standards of personal cleanliness have reduced the opportunity for cross-infection in young families.” 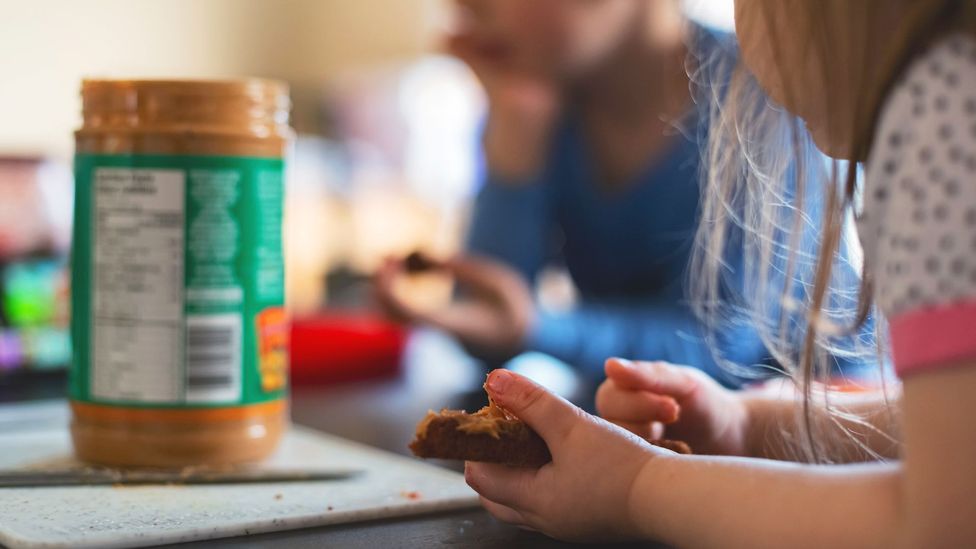 Children who have older siblings are less likely to get hay fever and eczema (Credit: Getty Images)

But many scientists now disagree with the theory – and recent research contradicts it. Rook points out that getting the common infections of childhood makes you more likely to have asthma. And experts agree that it is vital to maintain good hygiene to guard against disease.

A more modern interpretation of the hypothesis is that it doesn’t have to do with whether you keep your home clean or not, but rather with whether your gut is encountering different types of microorganisms. (Read more about what we do and don’t know about gut health.) “The reason that having older siblings was actually a good thing was because that increases your likelihood of meeting the microbiota of the family and in particular the microbiota of the mother,” Rook says. In doing so, you populate your gut with microorganisms that “educate” the immune system.

This is one of the reasons that there could be a link between food allergy and babies born by caesarean section: not emerging through the birth canal means that the baby does not ingest the useful bacteria there. In Denmark, it was even proved that the more cats and dogs you have, the less likely you are to have an allergic disorder. 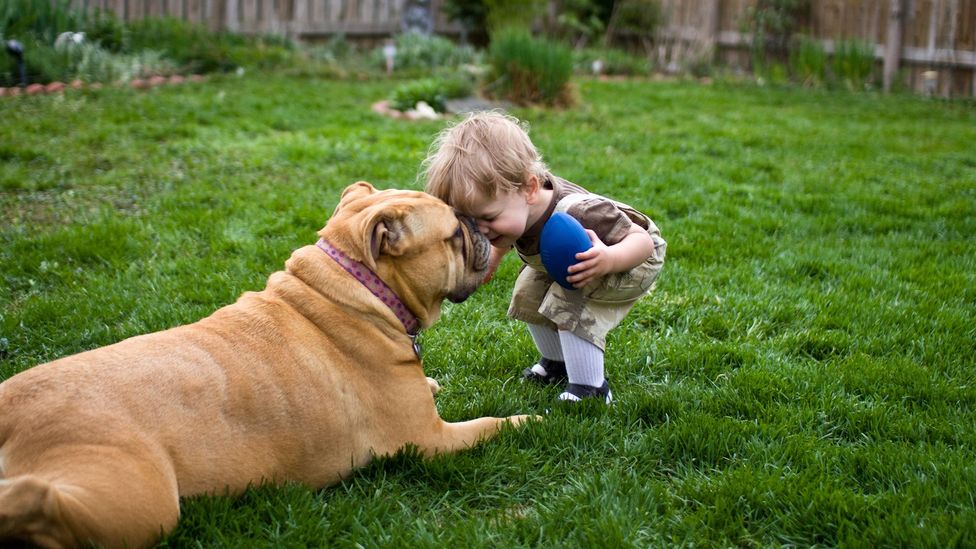 Owning a cat or dog may lower your risk of developing an allergy (Credit: Getty Images)

Rook coined the phrase “old friends” to describe his theory. Humans’ microbiota – the microorganisms of a particular habitat – are slowly changing, he says. Our modern homes, with their biocide-treated timber and plasterboard, have microbiota that bear no relation to that of the outside world in which we evolved. We are therefore meeting fewer of the friends – the microbes of old – that helped our immune system respond to foreign substances. This may also be why, for example, there is good evidence that the more antibiotics someone is given as a child, the more likely they are to have a food allergy; the antibiotics kill the healthy bacteria that colonise our gut.

“The rise of allergies we see is a part of a more generalised phenomenon of a failure of the control mechanisms of the immune system,” says Rook.

Aside from our “old friends”, another fascinating theory is dual-allergen exposure.

To explain dual-allergen exposure theory, it is worth exploring a detour into the way that food allergy advice has changed over the years. “When these food allergies started appearing [in the 1990s], people got very worried about people introducing peanut into babies’ diets,” says Clare Mills, a professor of molecular allergology at England’s University of Manchester. “And we actually ended up with guidance that said, ‘Don’t give these foods to your baby until they’re three years old’.”

This advice, she says, wasn’t really based on any evidence. In fact, parents should have done the very opposite: introduced allergenic foods as early as possible. 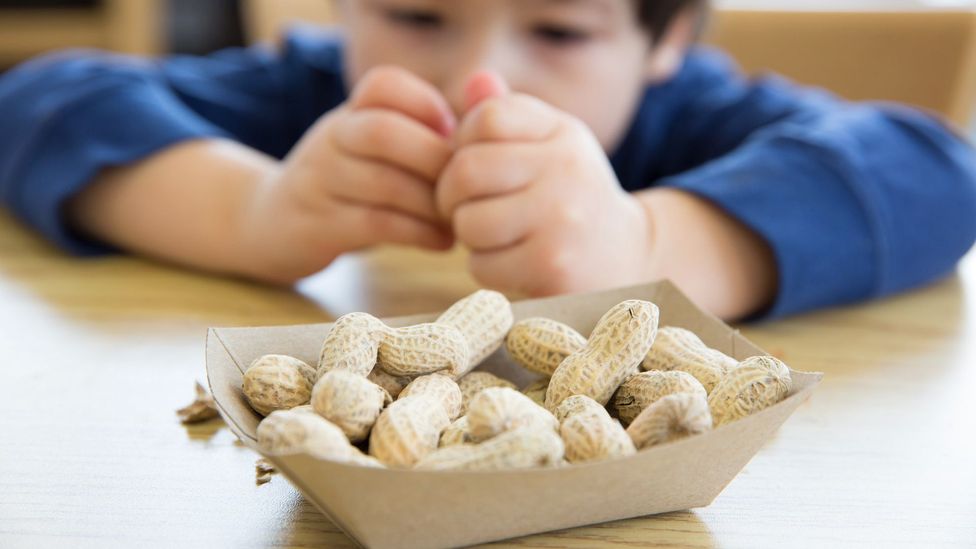 Rather than not giving peanuts to children, parents should have introduced allergenic foods as early as possible (Credit: Getty Images)

The reason is that just because an infant does not eat peanuts does not mean that they won’t encounter people who have. The child can be exposed to peanuts through dust, contact with furniture, and even creams containing peanut oil. If the child has not eaten peanuts, this contact with the skin can trigger a response from their immune system.

“If you’ve got a little infant with early-onset eczema and the parents are eating peanuts without washing their hands and then handling the baby, the baby can get sensitised through the broken skin,” says Amena Warner, head of clinical services at Allergy UK. When the child then eats the food, the immune system perceives it as a threat and attacks. Nadeau has turned this wisdom into a memorable rhyme: “Through the skin allergies begin; through the diet allergies can stay quiet.”

This is why, especially for children with eczema, experts are unanimous: a diverse range of foods should be introduced through weaning from around three or four months of age. “There is this window of opportunity in the early years to establish tolerance,” says Alexandra Santos, an associate professor in paediatric allergy at King’s College London. She helped demonstrate through a Learning Early About Peanut Allergy study that introducing peanuts between four and 11 months gave five-year-old children an 80% lower chance of having peanut allergy. 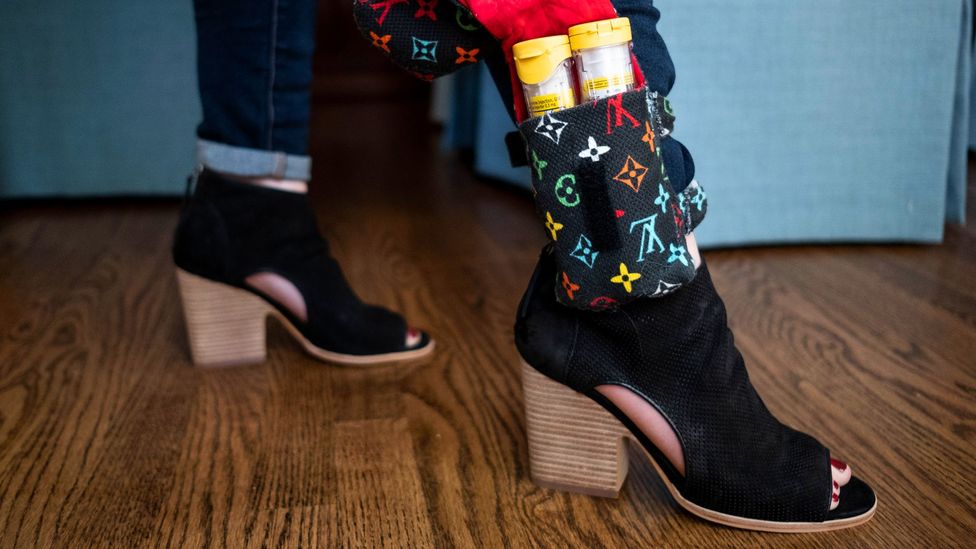 Children like 17-year-old Trece Hopp, who has a severe tree nut and peanut allergy, often keep an EpiPen on them at all times (Credit: Calla Kessler/Getty Images)

It might seem to follow that eating peanuts in pregnancy could protect children even further. But how much the prenatal environment affects allergy development remains unknown. In 2000, the American Academy of Pediatrics cautioned women against eating peanuts in pregnancy. In 2008, however, after a wide range of studies failed to find a conclusive link between prenatal diet and food allergies, the Academy changed tack and said that there was no persuasive evidence that pregnant women should either avoid or favour potential allergens.

That food allergies vary according to environment is proven by the absence of peanut allergies in countries where the population barely eats peanuts: the huge EuroPrevall study, which investigated the environmental, dietary and genetic influences on food allergy across Europe, found that peanut allergy in Greece, where they eat very little peanut, was 0%.  Santos says that when people emigrate, they are more vulnerable than natives to food allergies probably because of the difference in their genes. The earlier they emigrate, the more vulnerable they will be.

Another factor could be vitamin D. Are we suffering higher food allergy rates because we are spending more and more time indoors, depriving ourselves of vitamin D, which plays an important role in the development of the immunoregulatory mechanisms? Here the evidence is ambiguous. Some studies have demonstrated a link between vitamin D and modified food allergy risk (here, here, and here) but researchers in Germany found a positive association between maternal vitamin D levels and the risk of food allergy before the age of two; another German study found that infants with higher vitamin D rates at birth were more likely to have developed a food allergy by the age of three.  “It may be a Goldilocks scenario,” Nadeau writes in her book. “Both too little vitamin D and too much vitamin D are problematic.” (Read more about whether everyone should be taking vitamin D.) 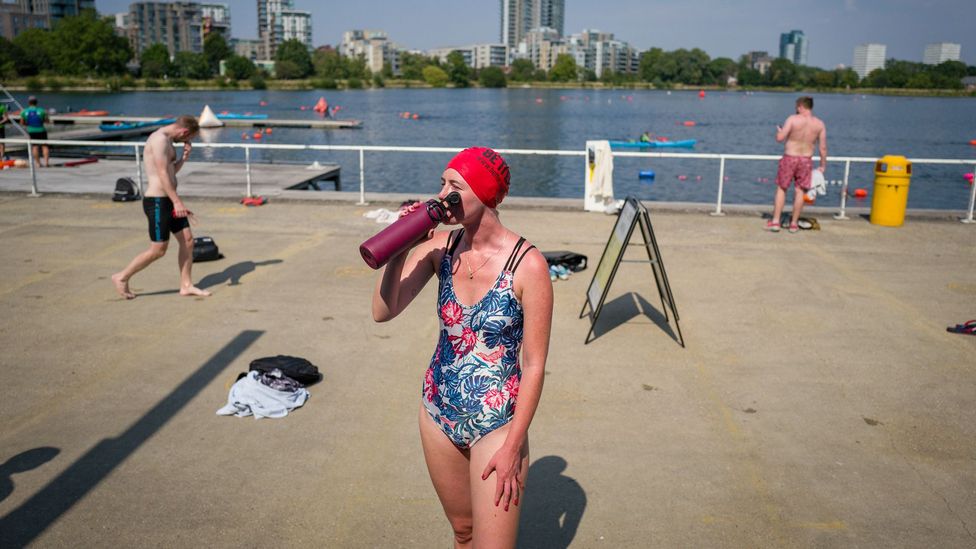 Both too little, and too much, vitamin D may contribute to allergy risk (Credit: Getty Images)

As research into the rise of food allergies continues, the question remains: how does someone stay safe amid a rise in food allergy cases? Avoiding a food entirely is not necessarily going to help – and could even hurt. If you are someone who already suffers with an allergy, immunotherapy – the consumption of minuscule but increasing amounts of the allergenic foods – is yielding extremely promising results. For some people, that could mean the difference between life and death.