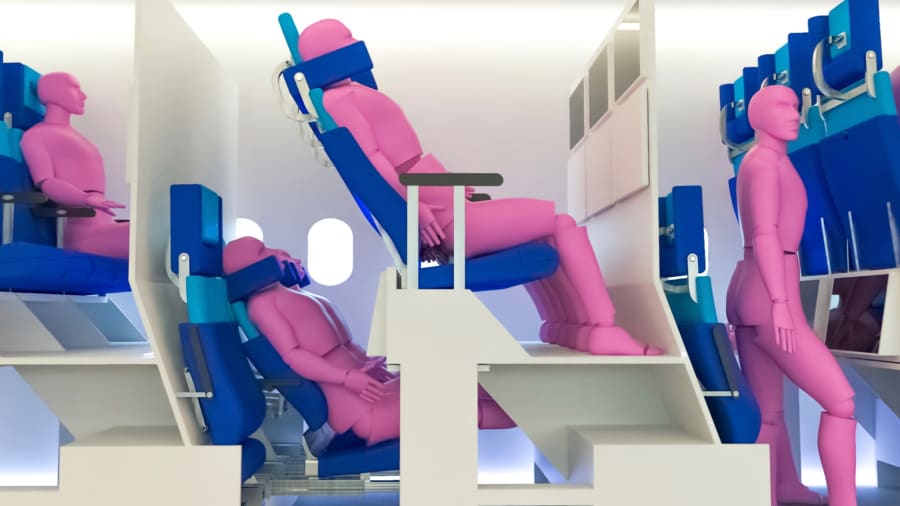 Airplane seat designers have long been dreaming up innovative economy cabin concepts, looking for the ideal balance between squeezing in as many passengers in as possible, and keeping the experience relatively enjoyable for fliers.And while the stand-up airplane seats that have been floating around for the past few years have yet to see the light of day, and the airplane seat overhaul that looked to be on the horizon last year in the wake of the pandemic never quite materialized, there are still many designers working to revolutionize the airplane cabin.Always keeping an eye on the latest updates and innovations is the Crystal Cabin Awards, known for spotlighting the newest trends in airplane interiors.After the pandemic delayed the announcement of the 2020 award winners, this year the Crystal Cabin Awards has shrunk down its usual eight categories to two key awards that recognize where aviation is right now: the Judges’ Choice category and Clean and Safe Air Travel award.From stretching out your legs on the bottom section of a multi-level economy seat cabin to curling up in a compartment built into the overheard locker, the nominees offer a glimpse into the potential future of flying.

The Chaise Longue Economy Seat is a striking reimagining of the economy cabin.Courtesy Crystal Cabin AwardsOne of the most intriguing concepts on the Judges’ Choice shortlist is the Chaise Longue Economy Seat Project, which envisages a dual-level seat cabin, with each row alternating between on-floor seating, and seats elevated a few feet above ground.The design is credited to 21-year-old student Alejandro Núñez Vicente who hails from Spain but studies at TU Delft University in the Netherlands. Núñez Vicente tells CNN Travel that his experiences traveling across Europe in economy partly inspired the idea.Fed up with a lack of leg room, he realized elevating the seat row in front would solve the issue. His design eradicates the overhead luggage compartment, allowing for more space in the cabin for higher level seats. Instead, luggage is stored in compartments under the seat.Núñez Vicente reckons this design would work well in the Flying-V airplane, which is currently in development at TU Delft, but he says it could also be implemented in a Boeing 747, Airbus A330 or any other medium to large airplane.Núñez Vicente says he took ideas already being discussed by the team working on the Flying-V project and brought his own vision to the table.The goal was to create a multi-level cabin experience that offered something appealing for travelers seated on both levels.”The lower row has the advantage of passengers having the lounge experience of a couch by stretching the legs, whilst the upper row provides an SUV experience, making it possible for instance to cross the legs due to the increased leg room and overall living space,” says Núñez Vicente.The seat design also offers more recline angles, and an adjustable back-rest and deployable neck-rest, to offer further comfort.”The current economy class is often limited to a single or slightly reclined position that impedes the user from having a comfortable and relaxing flight experience,” says Núñez Vicente.The design was in the works pre-pandemic, but the designer thinks it would work well in the wake of Covid-19.Courtesy Crystal Cabin Awards

The concept was already in the works pre-pandemic, but Núñez Vicente thinks the design lends itself to the current climate.”As it gives more space between passengers, and positions them at different heights, it is more suitable for flights in pandemic times,” he says.Plus, the seat pieces are designed to be easily movable, allowing a commercial aircraft to be converted into cargo use.Núñez Vicente is now working to bring the design to life in partnership with his TU Delft professors, Dr. Peter Vink and Dr. Wolf Song. The next step is designing testable prototypes.”At the moment, this is an internal student-led university project which still hasn’t been formally presented to airlines. However, some companies in the aerospace sector have already shown interest in the Chaise Longue Economy Seat project, presenting possible chances for future collaborations,” says Núñez Vicente.

Up in the clouds

Toyota Boshoku’s CLOUD CAPSULE concept also imagines a dual level airplane cabin.Courtesy Crystal Cabin AwardsThe Chaise Longue isn’t the only design offering a double-decker seating configuration that’s been recognized by this year’s Crystal Cabin Awards.Also on the Judges’ Choice shortlist is Toyota Boshoku’s CLOUD CAPSULE concept, which imagines the area above the economy seat as an additional space for passengers to retreat to once the airplane reaches cruising altitude.According to a statement from the Japanese company, the design should “make economy class travel safer, more enjoyable and more comfortable, while creating more revenue opportunities for the airlines.”The idea is passengers could buy a regular economy seat ticket, and then, as an add-on, purchase access to CLOUD CAPSULE, which Toyota Boshoku calls “a multi-purpose room that matches the experience of a business class seat.”The capsule, which offers unexpected privacy in the crowded economy cabin, could also have its own heating and cooling settings.Related contentNew airplane seat design will make it easier to sleep in economyThe idea is that Toyota Boshoku’s CLOUD CAPSULE could be purchased by economy travelers as an add-on.Courtesy Crystal Cabin AwardsAnother Judges’ Choice nominee looking to reimagine economy — although not by adding another level to the cabin — is Interspace, a seat design idea from Universal Movement, a spin-off from London-based design company New Territory.The seat aims to make it easier for passengers to sleep in economy, using padded wings that fold out from behind both sides of the seat back — allowing both for additional privacy and a cushioned spot to rest your head.CNN Travel tested out the seat when it premiered at the Aircraft Cabin Innovation summit in December 2019, commenting on the privacy and the comfort it offers.Universal Movement are now working with Safran Seats to make the concept a reality.The design caught the eye of the 27 Crystal Cabin Awards judges because it could be retrofitted to an existing airplane cabin.The Clean and Safe Air Travel category, meanwhile, recognizes designs including the UV Disinfection Wand from Boeing, which worked in collaboration with companies including Etihad Airways, to dream up a “portable magic wand” that could clean an airplane cabin.

Solar eclipse 2021: ‘Ring of fire’ to sweep across the Earth

Why does the internet keep breaking?