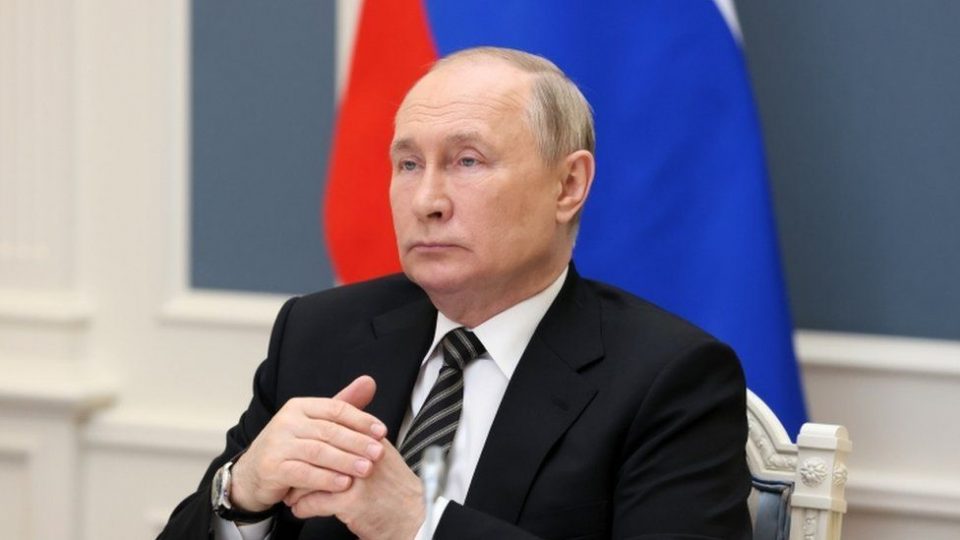 In an interview with French TV, Mr Lavrov said the Russian leader appears in public every day, and no sane person would see any signs of an ailment.

There has been increasing unconfirmed media speculation that Mr Putin, who turns 70 this year, may be suffering from ill health, possibly cancer.

The interview came as Russia continues its advance in Ukraine’s Donbas region.

Mr Lavrov said the “liberation” of the eastern region was an “unconditional priority” for Russia.

He repeated the Kremlin’s widely discredited line that Russia is fighting a “neo-Nazi regime”.

Noting that President Putin regularly appeared in public, Mr Lavrov told TF1: “I don’t think that sane people can see in this person signs of some kind of illness or ailment.”

“You can watch him on screens, read and listen to his speeches,” he said in comments released by the Russian foreign ministry.

“I leave it to the conscience of those who spread such rumours despite daily opportunities to assess how anyone is looking.”

British intelligence sources were quoted telling media outlets that Mr Putin was seriously ill in the last week. However, rumours about the condition of the Russian leader, long known for his healthy lifestyle and love of sport, have surfaced periodically for years.

Asked about the human cost of the fighting, which has seen devastating artillery and rocket attacks on some urban areas, the foreign minister insisted Russian soldiers were “under strict orders categorically to avoid attacks and strikes on civilian infrastructure”.

Since Russia invaded on 24 February, at least 4,031 civilians have been killed and 4,735 injured, according to the UN, and an unknown number of combatants have died or been wounded. More than 14 million people have fled their homes, with towns and cities reduced to rubble.

The fighting is now focused on the Donbas – the mining belt made up of the Donetsk and Luhansk regions. Separatists in the two regions, which historically have strong ties to Russia, broke away in 2014 and are now fighting alongside Russian troops to take full control.

Mr Lavrov told TF1 that winning in “the Donetsk and Luhansk regions, recognised by the Russian Federation as independent states, is an unconditional priority”.

However, he added, it was up to the rest of Ukraine if people there were “happy to return to the authority of a neo-Nazi regime that has proven it is Russophobic in essence”.

Russia has already been forced to pull back from an attempt to overrun the capital Kyiv, after been repelled by Ukrainian forces.

They have also been pushed back from the second city, Kharkiv, in recent weeks, with Ukrainian President Volodymyr Zelensky making a morale-boosting trip to the battle scarred city on Sunday.

Speaking in the city, he said his soldiers would defend their land “to the last man”. “They [the Russians] have no chance,” he said. “We will fight and we will definitely win.”

Kim Jong-un prepares for ‘dialogue and confrontation’ with the US