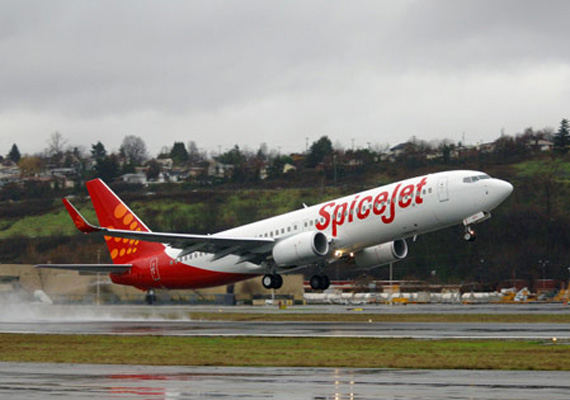 At least 17 people were injured on board a SpiceJet flight in India after the plane hit severe turbulence before landing on Sunday evening. The Boeing 737, carrying about 200 passengers and crew, was travelling from Mumbai to Durgapur. Amit Baul, who was on the flight, recounts the ordeal.

This article contains an image some readers may find distressing

It was a warm Sunday evening in Mumbai when we took off at 5.13 pm for a two-hour-flight to the eastern city of Durgapur, where I live and work as a businessman.

There was nothing out of the ordinary during the flight: the plane was packed to capacity, food was served on time and passengers were either dozing or glued to their mobile phones. I had flown between Mumbai and Durgapur half-a-dozen times in the last four months, and preferred SpiceJet because it offers a non-stop flight.

Thirty five minutes before the scheduled landing I felt some light turbulence. Again, nothing unusual about that. I was seated in an aisle seat in the last row, and fastened my seat belt.

But as we began descending things got worse. The next 15-17 minutes were the worst moments of my life.

I don’t know whether we flew into a storm but the plane began bouncing up and down and sideways. The Boeing 737 was going up and down like a rubber ball.

It felt like being dropped from a 100-storey building and then being kicked up to those heights in a matter of seconds. I tightened my seat belt and held on tightly to the seat handle.

I saw passengers, who had possibly forgotten to fasten their belts, being bounced up and down from their seats and hitting the overhead baggage bins. They were getting severely hurt. Two men sitting next to me also got a little hurt because they possibly hadn’t tightened their belts.

Sitting in front of me was a woman with her 11-year-old daughter. They were flung up from their seats a number of times, with their heads hitting the luggage bin. The final time, the woman came down and landed on my feet, which were sticking out into the aisle. She was so badly hurt that she stayed on the floor, clinging on to the seat handles.

Passengers were crying and shouting. Some began praying. I tried to look out of the window and noticed it was dark. The pilot kept announcing that passengers should put on their seat belts.

It was complete mayhem. The food waste from the galley was flying out – leftovers and beverage cups and cans choked the isles. A few food trays and seat handles had come off.

The oxygen panels had opened and the masks had dropped down. So many people got hurt, I saw blood stains on the ceiling. Passengers frantically asked for ice to reduce pain and swelling from their wounds.

“Do something fast, ma’am,” a passenger asked a harried air-hostess as she sprinted down the aisle to help a passenger.

There was a time when I felt I wouldn’t make it home. When the plane finally landed at 7.15pm, I felt like I had returned from the jaws of death.

We thanked the pilots profusely and stepped out into a hot summer evening in Durgapur. But the worst was to yet come.

It took an hour for the ambulances to arrive and take away the injured passengers to the hospital. There were no doctors in sight.

A paramedic of sorts was giving out painkillers and putting on bandages. There weren’t enough wheelchairs. Many passengers limped to the arrival hall. It was clear that the airport in Durgapur had no basic medical facilities.

When I went to the hospital later in the evening to get an X-ray of a swelling in my foot, I saw many of my fellow passengers getting treated for wounds and getting scans. I found out that the woman in the front seat had suffered very severe injuries in her stomach and shoulders.

(India’s civil aviation regulator has ordered an investigation into the incident. In a statement it said that the plane had experienced “severe turbulence” during descent, and the “auto-pilot got disengaged for two minutes and the crew manually flew the aircraft”.)

Why has Australia switched tack on Covid zero?