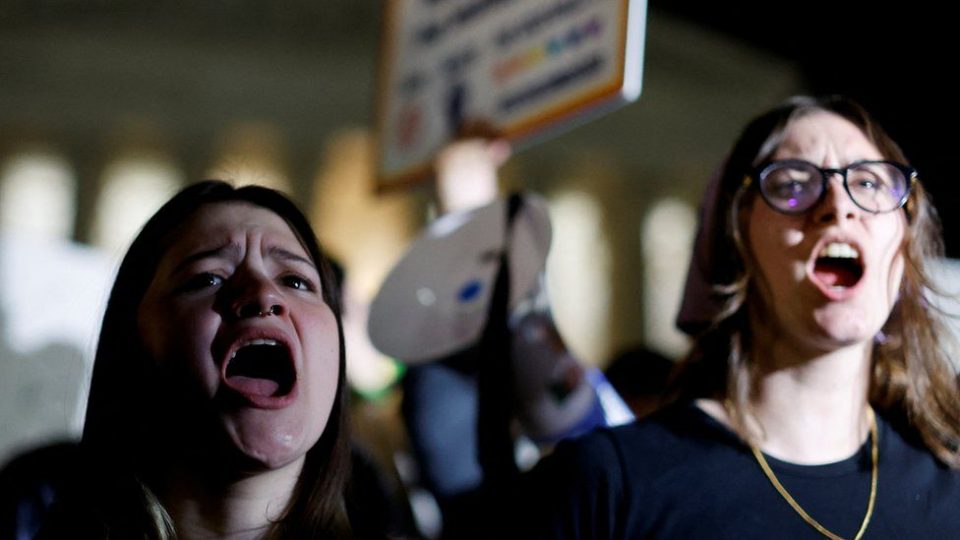 The US Supreme Court could be about to overturn the nationwide legal right to abortion, according to an unprecedented leaked draft of a court document.

In a 98-page draft opinion, Justice Samuel Alito writes that the 1973 Roe v Wade decision legalising abortion across the US is “egregiously wrong”.

If the top US court strikes down the ruling, “trigger laws” could instantly make abortion illegal in 22 US states.

The justices are not expected to issue a ruling until early July.

The 1973 law is in the court’s sights because it is weighing up a challenge to Mississippi’s ban on abortion after 15 weeks, which the justices heard in December.

But the reported threat to Roe v Wade comes at a time when reproductive rights are being threatened in Republican leaning states around the US.

And it sparked immediate outcry from Democrats, and protests – by both pro and anti-abortion supporters – outside the Supreme Court on Monday night.

Speaker of the House of Representatives Nancy Pelosi and Senate Majority Leader Chuck Schumer – both Democrats – issued a joint statement saying that if the report was accurate, the “Supreme Court is poised to inflict the greatest restriction of rights in the past 50 years”.

News outlet Politico published the leaked document in full, quoting Justice Alito as saying: “Roe was egregiously wrong from the start. Its reasoning was exceptionally weak, and the decision has had damaging consequences.

“And far from bringing about a national settlement of the abortion issue, Roe and Casey have enflamed debate and deepened division.”

Neither the Supreme Court nor the White House have commented on the leak.

Assume for a moment that this draft opinion becomes the law of the land. In an instant – because of statutes already on the books and “trigger” laws designed for such an occasion – abortion would be illegal in 22 states.

The legality of the procedure would become a vicious political battleground in the midst of an election year.

This is the significance of what may be unfolding in the Supreme Court.

Draft opinions, however, are just that – drafts. And there have been accounts of justices shifting their views as the opinion-drafting process unfolds within the cloistered court chambers. This unprecedented leak short-circuits all that.

For most of US history, the Supreme Court has operated like Mount Olympus, handing down opinions from on high. That opacity has been shattered perhaps for good, as the leaking spreads.

What it will mean for the legitimacy of the judicial process in the US remains to be seen, but within the institution itself it seems safe to assume that all trust between the judges, a collegial group once referred to as “the brethren”, is gone.

In an era when political norms have been broken like pottery in an earthquake, another big piece has fallen.

Six of the nine current justices on the court were appointed by Republican presidents. The other three were picked by Democratic presidents.

Politico reports that Justice Alito and four other Republican-appointed justices – Clarence Thomas, Neil Gorsuch, Brett Kavanaugh and Amy Coney Barrett – were in favour of the move against Roe v Wade but it is not clear how Chief Justice John Roberts will vote.

The leaked document is marked as a “1st Draft” and it was circulated in February, according to Politico.

If issued as a majority ruling, Justice Alito’s opinion would overturn the constitutional right to abortion in the US, paving the way for individual states to ban the procedure altogether, or place more restrictions on it.

The American Civil Liberties Union said that if confirmed, the decision “would deprive half the nation of a fundamental, constitutional right that has been enjoyed by millions of women for over 50 years”.

According to the BBC’s US partner CBS News, the leak itself will cause tremendous damage to one of America’s most respected institutions and likely see a full-blown investigation, involving the FBI, to unmask the source.

Roe v Wade in 1973 gave women in the US an absolute right to an abortion in the first three months of pregnancy, and limited rights in the second trimester.

In 1992, in Planned Parenthood v Casey, the court ruled that states could not place an “undue burden” on women seeking abortions before a foetus could survive outside the womb, at about 24 weeks.

Women in their 20s account for the majority of abortions – in 2019 about 57% were in this age group.

Spanish man jailed for killing and eating his mother