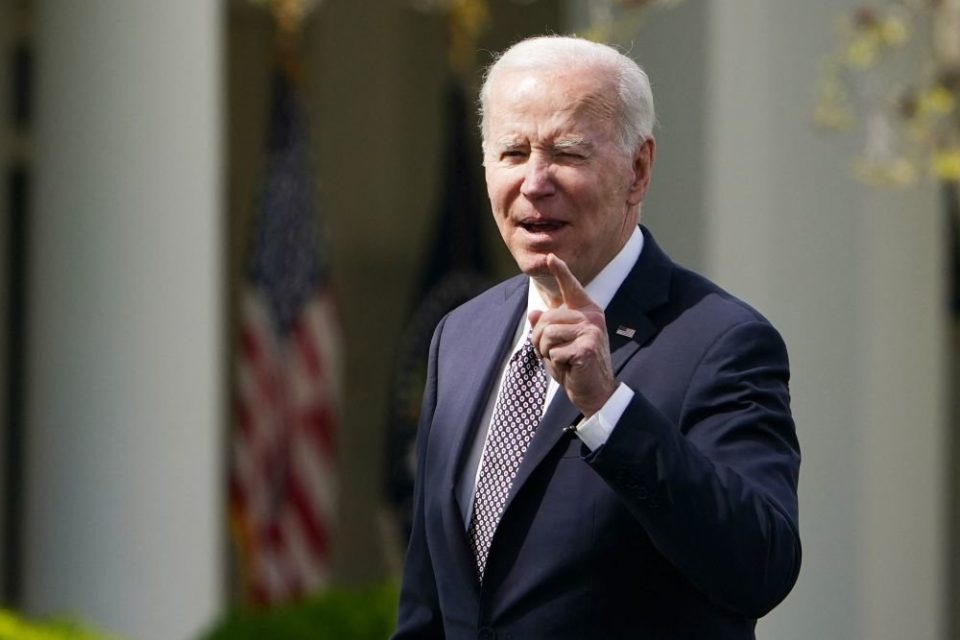 US President Joe Biden has called for Russian President Vladimir Putin to be tried for war crimes as evidence emerges of atrocities allegedly committed by Russian forces in Ukraine.

There is mounting international anger over the alleged killing of civilians in Bucha, a town near the capital Kyiv.

“This guy is brutal,” Mr Biden said of the Russian leader, adding that he believes Mr Putin “is a war criminal”.

Without evidence, Russia said images of atrocities had been staged by Ukraine.

An analysis of the photos by the New York Times showed at least 11 bodies on the streets since 11 March, when Russian forces controlled the city.

Russia claims that no civilians suffered under the Russian occupation of Bucha and says footage and photos from the city were staged.

But the timing of these satellite images appears to disprove the idea that the bodies only appeared after Russian soldiers left.

US officials say they are supporting a team of international prosecutors heading to Bucha to collect evidence.

The Ukrainian government has started a war crimes investigation after it said the bodies of 410 civilians had been found in areas around Kyiv. Some were discovered in mass graves while others had their hands tied and had apparently been shot at close range.

Officials in Kyiv also accused Russian forces of killing a village head, her husband and her son in the village of Motoyzhyn for aiding Ukrainian troops in the area.

“You may remember I got criticised for calling Putin a war criminal,” Mr Biden said. “You saw what happened in Bucha – he is a war criminal… but we have to gather all the detail so this can have a war crimes trial.”

Mr Biden said the Bucha discovery was “outrageous” and said that it was important Mr Putin was “held accountable” for atrocities committed by his military in Ukraine.

He would seek to impose further sanctions on Russia, he added.

The US state department said it had credible reports of rape, torture and summary executions carried out by Russian forces as part of what it described as a “broader, troubling campaign” by Moscow.

At the request of Ukraine, the international prosecutors will support the prosecutor general of Ukraine’s war crimes unit.

“There are reports and images of a nightmare litany of atrocities,” said state department spokesman Ned Price.

The Pentagon said it was “fairly obvious” that Russia had been behind the atrocities in Bucha, but that more investigation was needed to ascertain which units were responsible.

Ukrainian President Volodymyr Zelensky also accused Russia of war crimes during a televised address on Monday night and suggested Mr Putin’s regime would attempt to cover up evidence of other atrocities.

“I’m sure you know about the new old tactics of Russian propagandists who are constantly trying to reject accusations of the Russian military,” President Zelensky said.

“Now they are doing the same thing. The same lies. They are trying to distort the facts. But, as then, they will not succeed. They will not be able to deceive the whole world.”

France and Germany announced on Monday they are expelling Russian diplomats in response to the discoveries in Bucha.

German Foreign Minister Annalena Baerbock said the expulsion of 40 envoys was in response to the “unbelievable brutality” the Kremlin had unleashed in Ukraine.

The French government said it would expel “many” Russian staff, but didn’t specify the exact number.

Lithuania said it was expelling the Russian ambassador, citing atrocities it says have been committed by Russian troops in Ukraine.

Moscow’s ambassador to the UN said Russia would present “empirical evidence” to the UN Security Council demonstrating that Western statements on events at Bucha were lies.

At a press conference in New York, Vasily Nebenzya accused Ukraine and its “Western sponsors” of fabricating evidence and carrying out a false flag attack on its own people.

In Bucha, witnesses have described Russian soldiers firing on men fleeing after refusing to allow them to leave through humanitarian corridors.

At least 20 dead men were found lying in the street, many of them with extensive wounds. Some had been shot through the temple, as if executed, while others had clearly been run over by tanks.

Satellite images taken by Maxar show a 14m (45ft) mass grave in the city near the church of St Andrew and Pyervozvannoho All Saints.

“We will not allow encroachment on our state sovereignty, territorial integrity”-President of the Republic of Kazakhstan

Kazakhstan does not recognize DPR and LPR – Mukhtar Tleuberdi