It took just 10 minutes for Regina Status to pick up her Thanksgiving basket in front of her Bronx, New York, apartment. A last-minute delivery from Agatha House Foundation, a local food pantry, arrived just in time.But in those few minutes, Status slowly pushed her food cart, fighting the cold and the whipping wind she said took her breath away. In many ways it represents her life over the past few months.Status is one of 50 million Americans who won’t have enough to eat this year, in part because of the pandemic. According to Feeding America, the largest hunger relief group in the United States, the number of hungry Americans in the US is trending towards recession numbers, when 56 million Americans were food insecure.”I had no turkey,” said Status. “I didn’t even know where that was going to come from. But you know, I’ve got to take it one day at a time.” 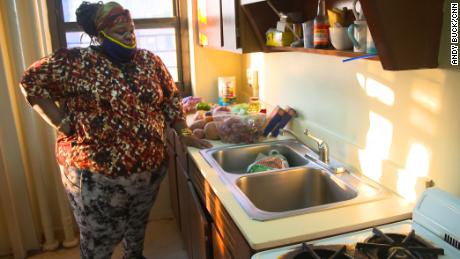 Regina Status stands in her kitchen with food from the Agatha House Foundation in the Bronx.Status says she wasn’t eligible for unemployment and is living off what she calls her “survival fund” — money she received after her daughters’ father died from cancer years ago. It was supposed to be for their college fund, but today it pays the bills.

In the summer, she was relying on multiple food pantries to make ends meet, but earlier this fall her car was totaled. Now she has no way to make her early-morning pantry runs and gets by on a once-a-week delivery from Agatha House. 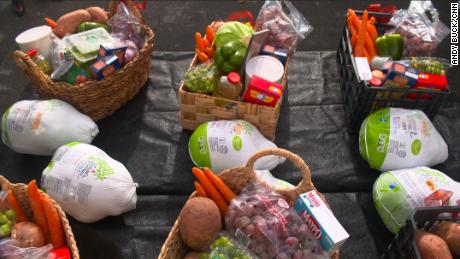 Joseph-Greenaway says the pantry has experienced a 100% increase in need since the pandemic, with many new faces.”A lot of them are coming here to make ends meet — the in-between to just get over the hump. Between their rents and the rest of the bills that have not stopped, they have to come to the food pantry,” said Joseph-Greenaway. 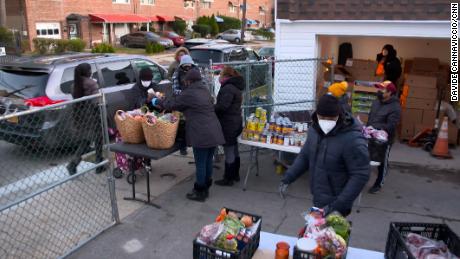 Agatha House volunteers give out fresh produce to those in need in the Bronx.

The Bronx has the highest number of Covid-19 cases and rate of unemployment of New York’s five boroughs. The Bronx’s 15th Congressional District has the highest food insecurity rate among children in the country, according to Feeding America. And now that the city’s public schools are remote-only, it places a higher burden on families to provide meals.

“There are 22 million children who even before this pandemic relied upon free and reduced lunch,” said Claire Babineaux-Fontenot, the CEO of Feeding America. “When you hear that schools are closed, not only does that mean that there are challenges for children with an education, but it also means lost meals.”

Regina Status’ two daughters do remote learning at home in their Bronx apartment.At home with her two high schoolers, Status now has to come up with money for three meals a day. “I have to constantly buy food because now I have to supply food for breakfast. Now I have to supply food for lunch,” she said. The once-weekly pantry deliveries she gets are essential.”I get eggs, I get milk. So all I have to do now is just provide the cereal, because they love their cereal in the morning,” Status said. 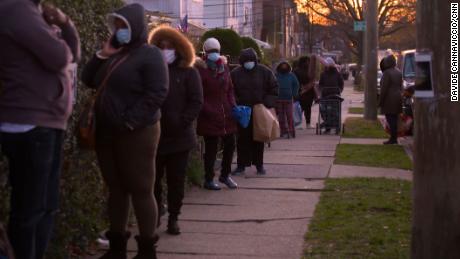 People wait in line to pick up food at Agatha House Foundation in the Bronx.Latino and Black households make up the majority of the population in the Bronx. Before the pandemic, Black Americans were nearly 2 1/2 times as likely to live in food-insecure households as White Americans, while Latinos were twice as likely, according to Feeding America. In their revised food insecurity projections for 2020, 18 of the 25 counties projected to have the highest 2020 food insecurity rates are majority Black.

“Communities of color are two times more likely to suffer, not only with the underlying illnesses that make the disease more lethal, but also with food and security itself,” said Babineaux-Fontenot.

In April, the USDA allocated $850 million for food banks’ administrative costs and food purchases through the CARES Act. The Department of Agriculture says it has an additional $873.3 million available to purchase agricultural products for food banks. But Feeding America says the need for additional federal aid will grow in the coming months.”Unfortunately, the need continues. We estimate that over the course of the next 12 months, the gap between what we have and what our neighbors are going to need is about 8 billion meals,” said Babineaux-Fontenot.The incoming Biden administration will inherit a hunger crisis, but Babineaux-Fontenot said there are steps the administration can take to get food to the people who need it.”There are regulations that require that you have certain work requirements in order to receive food, at a time when people were shut down and not even able to try to get jobs,” said Babineaux-Fontenot. “So there absolutely are regulatory barriers that make it even more challenging for vulnerable communities.” 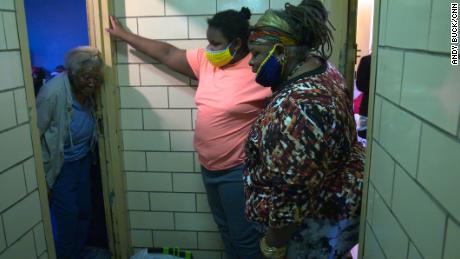 Regina Status, right, and her 13 year-old daughter, center, give food to their elderly neighbor Mammie Vinning in the Bronx.This Thanksgiving will look different for millions of Americans. Yet, despite Status’ struggle to put food on the table, she’s sharing the food she has this Thanksgiving with her elderly neighbor, who is also in need.”Even if we didn’t get the (food from) Agatha House or we were just having a regular chicken every day, just to say that you were alive to eat it, it that’s a blessing in itself,” she said.