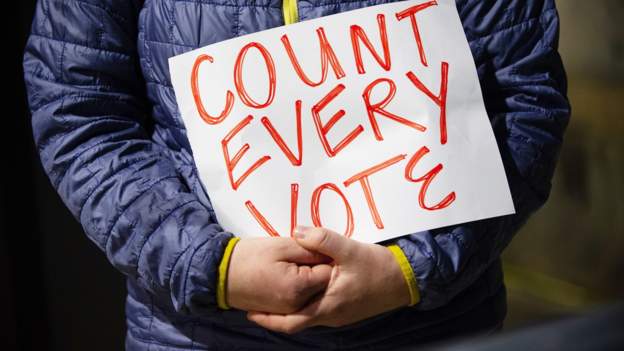 As we mentioned in an earlier post, the possible threat of violence in the US, in the wake of the undecided election, continues to be a theme of media coverage in several countries.

In some cases this ongoing narrative is aimed at undermining the US.

Iran’s state radio said protesters “are armed to the teeth and are not afraid of police”, while TV stations in Russia showed footage of protesters clashing with police.

While there have been protests over the vote and some reports of clashes and arrests, the demonstrations have been mostly small and peaceful.

It’s also important to remember that delays with the result were anticipated this year because of the increase in postal voting caused by the coronavirus pandemic.

In states where counting is still under way, officials say the process is going according to plan.

“We knew the process would take some time but the process is working,” Nevada Attorney General Aaron Ford told the BBC on Wednesday.

President Jeenbekov declared readiness to resign under a number of conditions