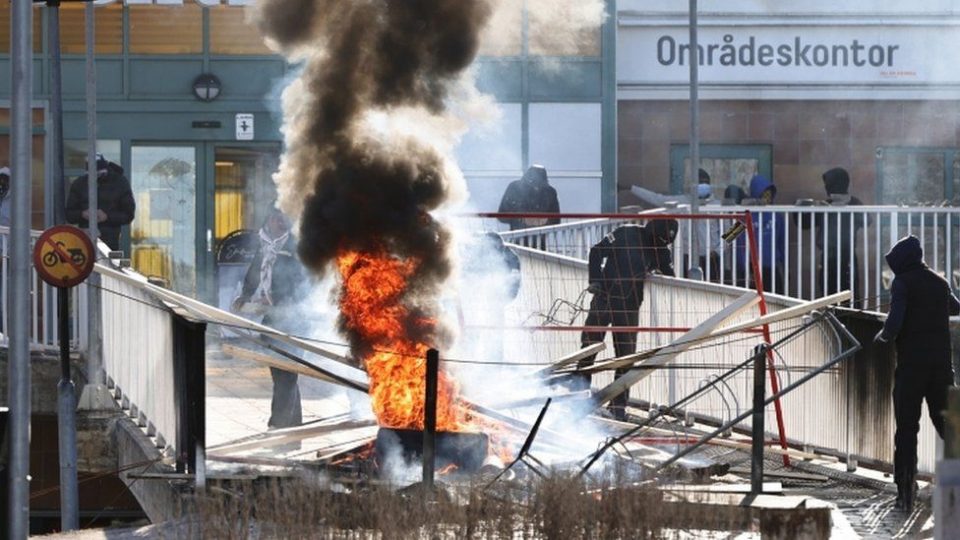 Clashes have taken place for a fourth day in several Swedish cities, sparked by the apparent burning of a Quran by a far-right, anti-immigrant group.

Local media said three people were injured in the eastern city of Norrköping on Sunday when police fired warning shots at rioters.

Several vehicles were set on fire and at least 17 people were arrested.

On Saturday, vehicles including a bus were set on fire in the southern city of Malmo during a far-right rally.

Earlier, the governments of Iran and Iraq summoned Swedish envoys to protest about the burning.

Danish-Swedish extremist Rasmus Paludan, who leads the Stram Kurs, or Hard Line, movement said he had burned Islam’s most sacred text and would repeat the action.

At least 16 police officers were reported to have been injured and several police vehicles destroyed in unrest on Thursday, Friday and Saturday in places where the far-right group planned events, including in the suburbs of Stockholm and in the cities of Linköping and Norrköping.

Paludan had threatened to hold another rally in Norrköping on Sunday, prompting counter-demonstrators to gather there, Deutsche Welle reported.

Local police said in a statement that they fired warning shots after coming under attack and three people were apparently hit by ricochets.

Sweden’s national police chief Anders Thornberg said in a statement on Saturday that demonstrators had shown an indifference to the lives of police officers, adding: “We have seen violent riots before. But this is something else.”

Protests against plans by Stram Kurs to burn the Quran have turned violent in Sweden before. In 2020, protesters set cars on fire and shop fronts were damaged in clashes in Malmö.

Paludan – who was jailed for a month in 2020 for offences including racism in Denmark – has also attempted to plan similar burnings of the Quran in other European countries, including France and Belgium.

Six ways shoebox-sized satellites are trying to change the world