At least 177 people are missing and 20 have died in northern India after part of a Himalayan glacier fell into a river sending a devastating avalanche of water, dust and rocks down a mountain gorge, and crashing though a dam.Rescue teams worked through the night to find survivors trapped under the debris. Most of the missing are workers from two hydroelectric projects in Uttarakhand’s Chamoli district, which were hit by the avalanche.Footage from Sunday’s disaster shows a fast-moving wall of water and rocks barreling down a narrow gorge and smashing through a dam at the smaller hydroelectric project before surging downstream, wiping out buildings trees and people.Ashok Kumar, Uttarakhand’s police chief, told CNN on Monday that 20 bodies had been recovered in the affected region. He said a further 177 people were still missing, including 35 workers who are believed to be trapped inside a tunnel at the larger, state-owned hydroelectric project.Some 2,500 people in 13 villages were initially cut off by the flash floods sparked by the glacier’s collapse, Ashok Kumar, senior official with the Uttarakhand police said Monday. Rescuers had reached all 13 villages by Monday afternoon and relief work is now underway in them, Kumar said. Meanwhile, rescue efforts are focused on clearing sludge and debris from the tunnel where the 35 workers are thought to be trapped. Rescuers managed to clear the mouth of the tunnel on Monday, according to a Twitter post from the Uttarakhand State Press Information Bureau. 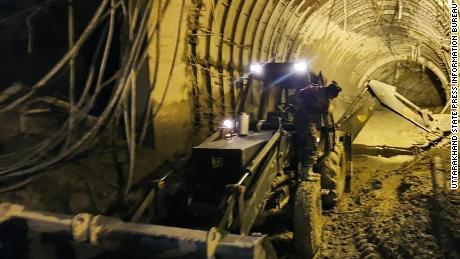 The mouth of the tunnel was cleared by Indian Army personnel on Monday, according to the Uttarakhand State Press Information Bureau.The bureau hailed the “tireless efforts of Indian Army personnel,” adding that relief operations in the area were still underway. According to Reuters, teams had managed to drill through 150 meters of the 2.5 km (1.5 miles) long tunnel, but the sheer volume of debris had slowed progress. On Sunday, rescuers pulled 12 people out alive from another, smaller tunnel at the same site, according to Kumar. 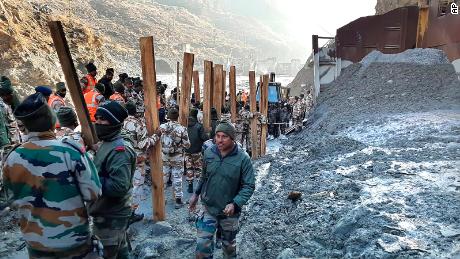 Indo Tibetan Border Police (ITBP) personnel take part in rescue efforts at the hydro power project at Reni village in ​​Chamoli district, Uttarakhand, February, 8, 2021. The ecologically sensitive Himalayan region is prone to flash floods and landslides. Himalayan glaciers are also vulnerable to rising global temperatures because of man-made climate change. As the ice melts, glaciers become unstable and start to retreat. Large glacial lakes can form, and when parts of the glacier in front of it break away they unleash the water trapped behind it causing an outburst of floods. A 2019 study found that Himalayan glaciers are melting twice as fast as last century, losing almost half a meter of ice each year. 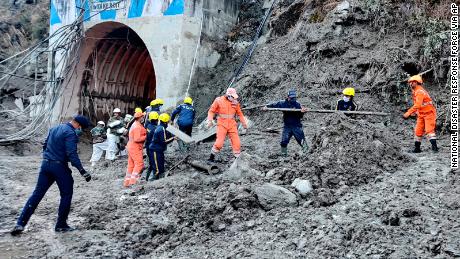 This photograph from the National Disaster Response Force shows NDRF personnel rescuing workers at one of the hydropower projects at Reni village in Chamoli district. Others have pointed to a high level of construction along the state’s rivers, which in recent years have seen an increasing number of hydroelectric dams, projects and infrastructure connecting them, such as roads and new developments.While environmentalists have long warned that rampant development in the Himalayan state is an ecological catastrophe waiting to happen, authorities described Sunday’s landslide as a freak event. “This was a one-time incident. The glacier broke, and with … debris all came down and flooded the power project here,” said Kumar, the Uttarakhand police official. Sunday’s floods brought back memories of a similar devastating incident in 2013, when the state was hit by what was dubbed by the area’s chief minister as a “Himalayan tsunami.” Nearly 6,000 people lost their lives in those floods, according to Reuters. 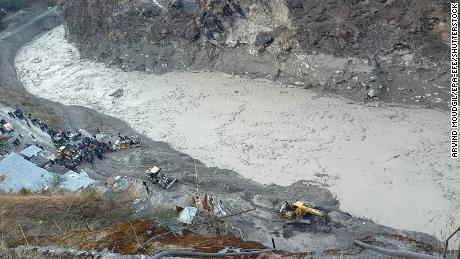 Chief Minister Trivendra Singh Rawat said at a press conference Sunday that “Uttarakhand has witnessed a terrible disaster” and the state was expecting “significant loss to human lives and infrastructure.”It was after 10 a.m. local time when a piece of the Nanda Devi glacier broke apart, sending torrents of water down the Dhauli Ganga river valley located more than 500 km (310 miles) north of New Delhi, according to authorities. Most of the destruction was centered on two hydropower projects. The Rishiganga Power project — a small dam of 13.2 megawatts — was completely washed away in the deluge, India’s Ministry of Power said in a statement Monday. The state’s chief minister said 35 people were working at the plant when the waters hit, and “roughly 29 to 30 people are missing.” Rising waters prompted authorities to issue urgent evacuation notices to people living further down the Alaknanda River. 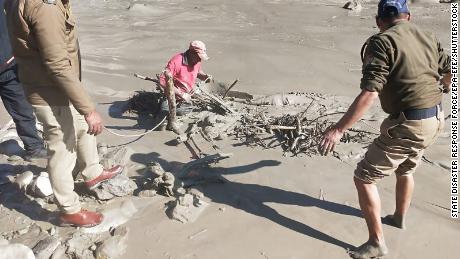 A handout photo from the State Disaster Response Force shows rescue operation near the Dhauliganga hydro power project in Chamoli district, Uttarakhand.As flash floods surged down the valley, they caused extensive damage to a second and much larger 520 megawatt hydro project under construction about 5 kilometers away from the other project. Some 176 laborers were workingon the Tapovan Vishnugad hydropower project site, which has two tunnels, and is state-owned by NTPC, India’s largest power utility.More than 30 workers could be stuck in the second tunnel, he warned. Rescuers are battling to reach them but the surrounding road is covered in debris.A witness told Reuters that the avalanche of dust, rock and water came without warning.”It came very fast, there was no time to alert anyone,” Sanjay Singh Rana, who lives on the upper reaches of the river in Raini village in Uttarakhand, told Reuters by phone. “I felt that even we would be swept away.”Indian Prime Minister Narendra Modi sent a message of support in the wake of the disaster. “Am constantly monitoring the unfortunate situation in Uttarakhand,” he tweeted.”India stands with Uttarakhand and the nation prays for everyone’s safety there. Have been continuously speaking to senior authorities and getting updates on NDRF (National Disaster Response Force) deployment, rescue work and relief operations.” 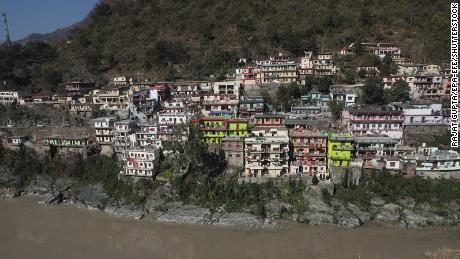 View of the overflowed Mandakini river, a tributary of the Alaknanda River, near the Rudraprayag district in Uttarakhand, India.

While experts say it is too early to conclude exactly what led to Sunday’s avalanche, they have said human-induced global warming is certainly at play. Dr. Ankal Prakash, Research Director at Indian School of Business’ Bharti Institute of Public Policy, said “it looks like a climate change event.””The prima facie evidence we are seeing is that it’s because of the glacial decline and melting because of global warming,” said Prakash, who was author on the UN Intergovernmental Panel on Climate Change’s landmark report on the Ocean and Cryosphere. The 2019 report, Prakash said, documented how “climate change has altered the region to an extent that the frequency and magnitude of natural disasters will increase.” 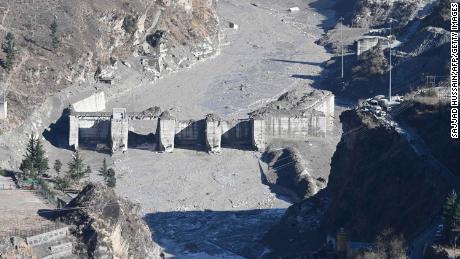 The remains of the dam along the river in Tapovan on February 8.The area where the avalanche and flooding occurred is extremely remote and mountainous and it can take days to reach some of the villages dotted throughout the valleys, according to Prakash. These places “need basic facilities such as infrastructure, water, roads, and sanitation,” Prakash said, adding that “we need development here because they are some of the poorest areas.”However, discussion should focus on what kind of development and projects are built, and to assess how damaging they could be to the environment, he said.